A downloadable Into the deep for Windows and macOS

A deep journey into a world of conquest and adventure. Into the Deep combines rogue-like and card game aspects to create a truly unique game.

In another realm, intertwined with our own, there exists a land that time has forgotten. A dark realm, stained with the darkest shades of mankind's intent; a forsaken world, shrouded in sorrow. Its inhabitants, locked in a perpetual dark age of filth and madness. Within this Realm of Sorrow, the arcane arts have endured. Many are those who would wield the infinite power of magic, and many are those who would abuse it. Though it is not fully known who was responsible for opening the Tear, this day it proves irrelevant. For out of the merging of realms that is the Tear, poured all the denizens of what must be Hell. A year has passed, and the Realm has burned. The weak have perished; and few remain who posses the will to endure. Blessed be, those brave souls who would face the flood of infinite evils that have engulfed the world...

Select your character and jump into the action. All you need to do is click the cards. Be careful, read descriptions. Monsters attack you if you don't kill them with one shot.

This game has a lot of potential, but it's a shame the dev(s) aren't going to continue working on it.

It's pretty unbalanced as it is and the fact that it forces you to pick up random items despite the fact that you have better ones from time to time is annoying. Especially when you're cursed at RNG like me because right after you pick up that Rusty Sword to replace the Legendary Sword, you get a Ghost Assassin who can now two-shot you thanks to the shitty armour you were forced to pick up 4 turns ago and you can't even scratch him because you just lost 80% of your damage to the Rusty Sword.

The font is pretty difficult to read, and there are also no tooltips or info about anything within the game except the main starting page giving information about the class you choose.

Well done to the dev(s) on making a fun game for a game jam.

This was made for a game jam, and there's no plan to continue it. Sorry for the disappointment. 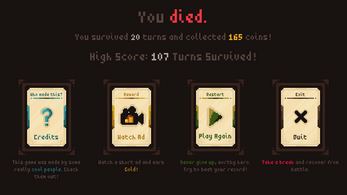 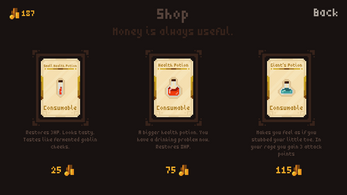 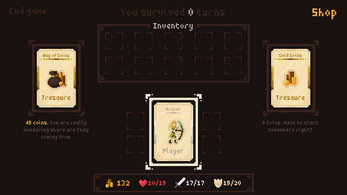 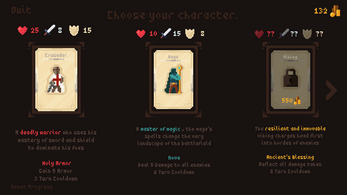